Last week I spent the weekend at my parents house, and while being nice sometimes it gets a bit boring. And since food is my go to in every occasion () I decided to bake this lovely cake from the local rose. One of my favorite holistic lifestyle blogs and the cake is so good! We finished the entire cake in one go

Zest the citrus into a medium sized bowl. Add the olive oil, sugar and vanilla extract. Whisk in the eggs until combined. In the same bowl, add the flours, baking powder and cardamom and stir until combined.

Pour the batter into the baking mold. Peel the blood orange and slice into 1/4 inch rounds. Place on top of the cake.

Bake the cake until a tooth pick inserted comes out clean around 30 to 45 min.

First things first: separate the eggs and juice the lemon. You might want to pass the lemon juice through a tea strainer once just to get the seeds and pulp out.

In a large bowl, beat the butter and sugar with an electric mixer for about 2 minutes.  Add the eggs and yolks and beat another minute.  Mix in the lemon juice. The mixture will look curdled, but it will smooth out as it cooks.

In a medium, heavy saucepan, cook the mixtue over low heat until it looks smooth.  The curdled appearance will begin to disappear as the butter in the mixture melts.  Increase the heat to medium and cook, stirring constantly until the mixture thickens.  It should take about 15 minutes.  It should leave a path on the back of a spoon when you run a finger through it and will read 170 degrees on a thermometer.  Don’t let the mixture boil. 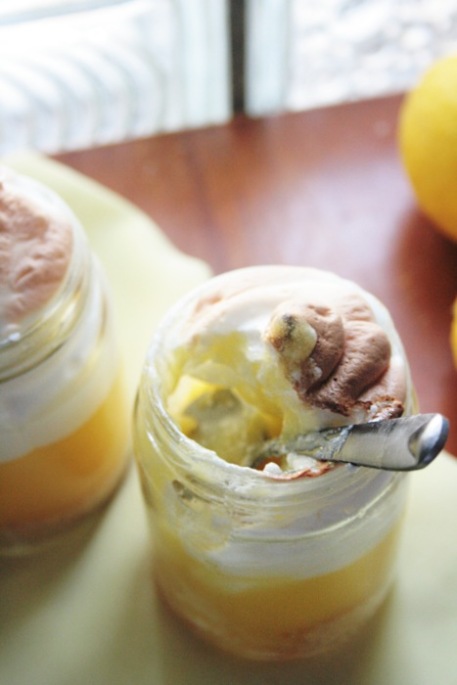 Remove the curd from the heat; stir in the lemon zest.  Transfer the curd to a bowl.  Press plastic wrap on the surface of the lemon curd to keep a skin from forming and chill the curd in the refrigerator

To make the pie in a jar, all you need is some crackers (Graham, or any other kind for that matter) and use the leftover egg whites from the lemon curd recipe to make a meringue.

Crush the cracker using a food processor or a rolling pin. Add in the sugar. Melt the butter and mix until combined. Set aside.

Put the egg whites in a large clean mixing bowl. Beat them on medium speed until soft peaks form.

Turn up the speed and add the caster sugar 1 tablespoon at a time, beating 3-4 seconds between each addition. Don’t over beat or the meringue will weep (turns watery). Set aside.

Preheat the oven at 180 degrees C.

Prepare your jars. Spoon 2-3 tablespoons of cracker mixture into the bottom of the jar and press down to make a firm base.

Use a piping bag to fill the jars with the lemon curd until up to 2/3 of the jar height.

Use another piping bag to pipe the meringue on top of the lemon curd layer.

Put in the oven until the meringue firms and browns.

From Notions & Notations of a Noice Cook

All pictures and recipe are hers! 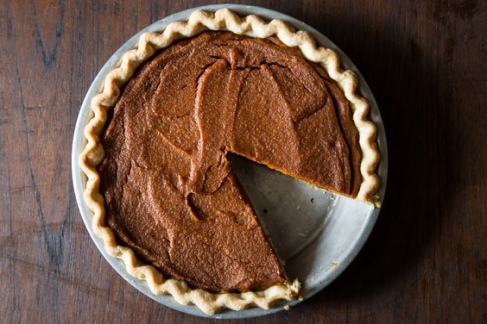 I like to use a food processor for my pie crusts, which would make some crust connoisseurs cringe, but is fast and easy. Start by placing the flour, salt, and sugar in the bowl of a food processor fitted with the S blade. Pulse to combine. Add your solid coconut oil and pulse until mixture is crumbly and will stick together when you squeeze it. Pulse in 1/3 cup water, or until the dough holds together well when you make a handful of it and is visibly starting to come together in the food processor. It’s fine to have a lot of crumbs still–that’ll make a good, flaky crust–but it should be easy to shape into a large ball, too. If necessary, add a little more water until the texture is right. Alternately, you can cut the oil into very small pieces and work them into the flour with bare, dry hands. Add the water and knead the whole mixture together until it has the texture described a moment ago.

Turn dough onto a clean, dry surface that has been dusted with flour. If you’re not ready to use the crust, shape it into a flat ball, wrap with saran, place in a freezer bag, and freeze. If you are ready to use it but not this very second, you can store it in the fridge till it’s time to bake.

When you are ready to use the crust, make sure it’s soft enough to roll, and use a rolling pin to roll the dough into a large circle–enough that you can imagine easily covering your pie pan–using extra flour to keep things from sticking as you go. Gingerly lift it onto your pie crust (little tears are fine, and you can fix them later). Squeeze the edges to make a pretty, puckered pattern. Refrigerate crust till you have the filling made and are ready to bake it. 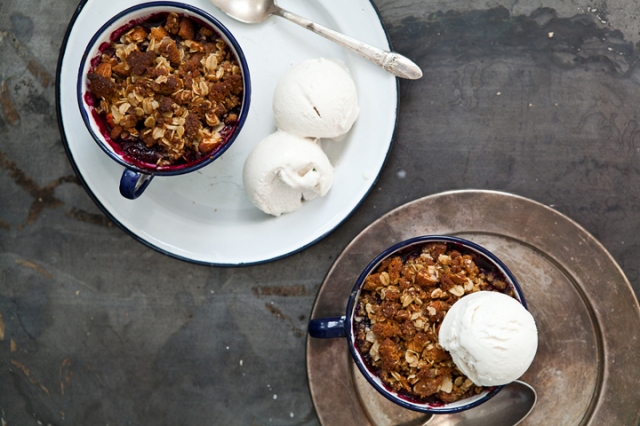 I found this recipe the other day over at Forty-Sixth at Grace (love that blog) , and since our garden is overflowing with apples and we had some ligonberries from last year in our freezer I decided to change the original recipe and it worked out amazing! Sweet apples and sour lingonberries!! 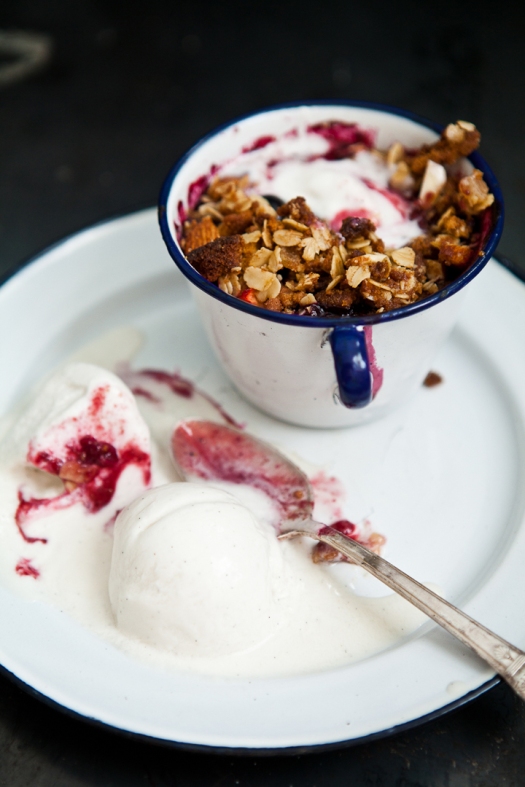 In a large mixing bowl, combine the berries, peaches, sugar, lemon juice and spices. Whisk in the cornstarch and stir until blended. Spoon fruit mixture into small (4-6 ounce) containers of choice (oven-safe tea cups, small mason jars or ramekins work great)
In another large bowl, crush cookies with a fork (or your fingers!) so that they are about half-way mashed, leaving a few big cookie chunks. Stir in remaining dry ingredients. Add the melted butter to the dry mix and combine. You may have a small bag leftover with this recipe. It keeps well in the freezer for up to a month – this way you can have impromptu ginger crumble whenever fruit is ripe.
Generously top each crumble with the cookie mix. Bake at 350 degrees for 30-40 minutes, until golden brown and bubbling at the edges. Let cool for five minutes. Best served with some goat milk ice cream!

Recipe:
Classic Apple Pie (or Tart) from David Tanis, A Platter of Figs

Put the flour, butter, and salt in a bowl. With your fingers, work the butter into the flour until it looks mealy, with some large flecks of butter remaining. Pour the egg-ice water mixture into the bowl and quickly knead the dough for only a minute or two, until it comes together. It will be soft, a little sticky, and, though gathered together, a little rough looking.

Sprinkle the dough with a little flour and pat into a rectangle about 1 inch thick. Wrap and refrigerate for at least an hour, or overnight.

Divide the pastry in half (there will be enough for 2 tarts; you can freeze one half for later). Roll out the pastry to a rectangle, approximately 11 by 16 inches.

Transfer the dough to a baking sheet and let it relax, then trim the edges to fit the pan with a little going slightly up the sides. Cover with plastic wrap and refrigerate.

Peel the apples and cut into quarters. Remove the cores and use to make glaze as follows: Combing the 1 cup sugar and 1 cup water with the cores. Stir at first to dissolve sugar, then simmer to a thick syrup. Strain and reserve. (Or use honey or a good apricot jam, thinned, for a glaze.) Slice the apples as thin as possible. Arrange the apple slices over the pastry, overlapping them like cards in solitaire. At this point the tart can be covered with plastic wrap and refrigerated for up for up to 8 hours.

Preheat oven to 375˚F. Sprinkle the sugar generously over the apples and bake until they are beautifully browned and the pastry is crisp, about 45 minutes. Cool on a rack.

Just before serving, reheat the glaze. Slide the tart from the pan onto a cutting board. Paint the apples with the warmed glaze. Slice and serve. 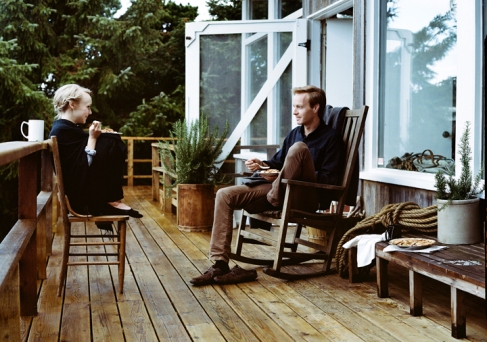 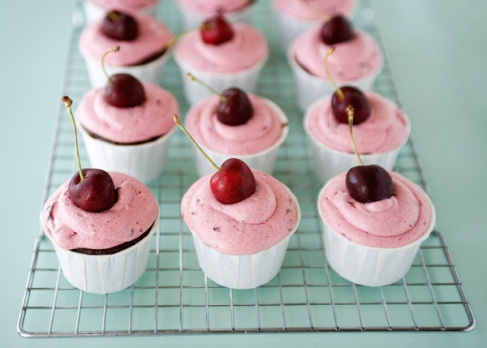 2-3 Tablespoons almond milk (or whichever non-dairy milk you have, I just always have almond milk on hand)